Avian Paramyxoviruses vary in their ability to cause disease and also in the type of disease they cause. Some cause very severe disease while others cause only mild symptoms. Paramyxoviruses principally target the bowel, the kidneys, the respiratory tract and the central nervous system but different organ systems are affected and to different extents by different Paramyxoviruses and the symptoms the birds show depend on this. Paramyxoviruses also vary in the species of bird that they are able to infect. Each virus also has its own set of characteristics involving incubation time and time to recovery, etc. Paramyxovirus’s ability to cause disease is inversely proportional to the incubation time (viruses with a long incubation time cause milder disease and vice versa). The ability for infected birds to shed the virus (become infective to other birds) correlates well with the onset of symptoms.

Pigeon PMV1 was first recognised in the late 1970s, probably having arisen in the Middle East. The virus reached Europe by 1981 and spread virtually all over the world.

Symptoms in pigeons
The exact symptoms caused by the virus tend to vary from bird to bird and also loft to loft. The most common sign is associated with the inflammation of the kidneys caused by the virus. Healthy kidneys concentrate urine and maintain a normal fluid balance in the body. Damaged kidneys lose this ability and so affected birds produce a lot of dilute urine leading to profuse watery droppings. In order to prevent dehydration, infected birds need to drink a lot leading to increased water intake and a dilated, fluid-filled crop.

Other symptoms include breathlessness associated with inflammation of the lungs, and diarrhoea and weight loss associated with inflammation of the bowel. In some birds the virus can also inflame the brain and these birds develop loss of balance, decreased awareness of their surroundings and neck twisting (similar to birds with Paratyphoid). Birds often die within one to two days of becoming unwell. In affected lofts up to 100% mortality can be experienced.

Neurological signs develop in birds that survive the acute phase of the disease. Provided these birds are adequately supported, which may include hand feeding, their long-term chance of recovery is good. Full recovery can take weeks or even months. Recovered birds can resume a successful racing career and certainly be bred from, although they do have reduced fertility the first breeding season after their recovery. Rarely, an immune-based encephalitis (similar to ‘old dog distemper encephalitis’) can develop in response to viral exposure, leading to persistent symptoms, but this is very uncommon.

​This virus’s incubation time in Australia appears to be between two and ten days, meaning that it takes two to ten days for a pigeon to start to become sick after it is infected with the virus. This is consistent with the way PMV1 behaves in pigeons overseas. Based on overseas figures it is thought that recovered birds shed the virus for up to two months. The virus survives in the environment for up to 60 days. 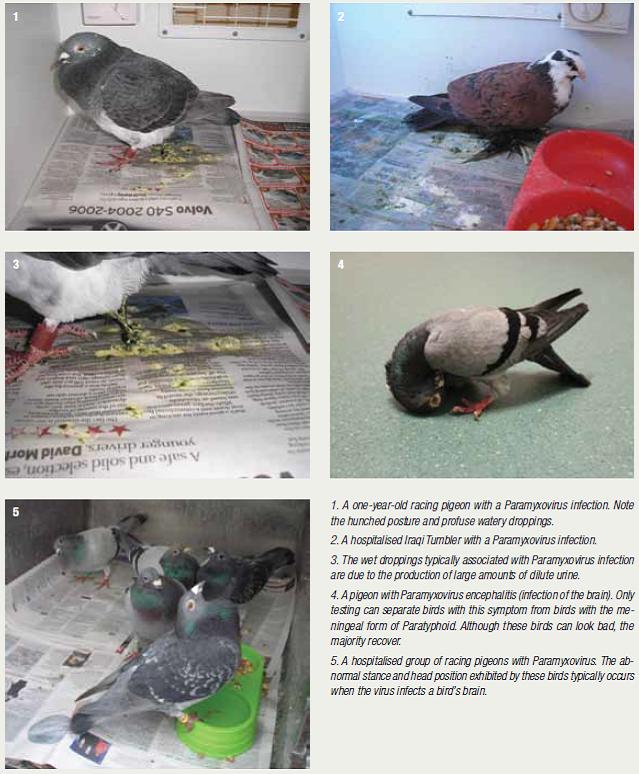 Diagnosis
Often the symptoms displayed by the birds are very suggestive (for example, a profoundly unwell bird drinking a lot of water and dying within two to three days). Definitive diagnosis is usually through a test called a PCR which tests for the PMV viral DNA. Your vet can take a swab from the cloaca or throat or take a drop of blood and submit this to the lab for a PCR test. A PMV QUICK test is also available. PMV viral particles can also be visible when tissue samples are collected from a dead bird and forwarded to an avian pathologist for microscopic examination. Blood can be collected and a haemagluttination inhibition (HI) antibody test done. As HI antibodies will form in response to either vaccination or an active PMV infection, further testing is required to confirm disease due to PMV.

Treatment
There is no direct treatment for Paramyxovirus, however supportive treatment helps some birds recover and can make a difference in individual birds regarding whether they live or die. Birds too sick to look after themselves in the loft should be removed, kept warm (25–30C) and hand fed and watered. Supplements with electrolytes, multivitamins and probiotics are helpful. Treating any other concurrent diseases such as wet canker or coccidia is also beneficial. Some fanciers and vets recommend vaccinating, sometimes repeatedly, unwell birds; however, there is no evidence to support this in the veterinary literature.
Vaccination
PMV is controlled through preventative vaccination. Several different vaccines are available throughout the world. Some, such as La Sota, are based on killed chicken origin strains of NDV (for example, Poulvac by Pfizer and Newcavac by MDS) while others are based on live, modified strains of NDV from chickens (e.g. NDV4 by Bioproperties). Some vaccines are based on modified pigeon origin PMV1 strains.

In Australia the common vaccine used is the La Sota vaccine. Two inoculations are given four weeks apart. Eighty per cent of pigeons are immune four weeks after the first inoculation and 100% are immune four weeks after the second inoculation. After vaccination, however, the immunity pigeons form, although it may be high enough to prevent them becoming unwell or dying if exposed to the virus, is not high enough to prevent them from catching the virus from birds with the disease.

After several weeks, infected vaccinated birds clear the virus without showing any symptoms themselves but vaccinated birds thus have the potential to act as temporary carriers of the disease and can transmit the disease to non-vaccinated birds during this time. Evidence suggests that this is less likely to occur if vaccines prepared from pigeon PMV1 strains are used. In Australia the only vaccines available are the oil-based killed La Sota vaccine and the modified live NDV4 vaccine. Testing has shown that the La Sota vaccine confers a higher immunity.

The current recommendation to Australian pigeon fanciers is that all birds be vaccinated twice in the first year of life and then receive annual boosters. Youngsters are usually vaccinated at 28 days of age and then four to eight weeks later. There may be an advantage in birds receiving a further vaccination four to six weeks before the start of racing. Breeders receive annual boosters which are usually given in winter (after moulting in autumn and before pairing in spring).

Use of the La Sota vaccine in pigeons – information sheet supplied to clients
You have been supplied with a 500ml bottle of inactivated La Sota vaccine. To protect pigeons against PMV, birds are given two doses of 0.5ml vaccine 4-8 weeks apart the first year they are vaccinated and then a single 0.5ml booster each year. Each dose is given by subcutaneous injection. The vaccination process is easier and more efficient if one person holds the pigeon while a second person administers the injection. The vaccine should be stored between 2 and 8C; i.e. in the fridge (not the freezer). The vaccine bottle can be re-used after it has been opened. The vaccine loses its effectiveness if it becomes warm for an extended period or is contaminated
with germs. Use an 18 gauge needle and a 10ml syringe to remove the vaccine in a sterile way from the bottle for transfer to a vaccination gun, another sterile bottle or to vaccinate the birds directly. The vaccine bottle should be returned to the refrigerator as soon as possible.
Vaccination technique
1. The pigeon should be restrained as shown in the photo. Extend the neck and fold several feathers at the base of
the neck the ‘wrong’ way to expose a line of skin.
2. When using a needle and syringe most fanciers use a 3ml syringe and a 21G needle. Most fanciers however prefer
to use a vaccination ‘gun’. Here a 21G needle should also be used. The vaccine will need to be transferred from
the 500ml container across to a smaller container that is supplied with the gun. Once familiar with a vaccine
gun, large numbers of birds can be vaccinated quickly and efficiently
3. Insert the end of the needle 2–5mm superficially under the skin and inject as shown in the photo. It is not uncommon
to see a white flare develop under the skin as the vaccine is injected.
4. Remove the needle. A small amount of bleeding is not unusual.